History of the hog roast

Roasting whole hogs is a centuries old custom and was a commonplace style of cooking dating far back in history. The early cave man would throw the hogs straight on a hot sizzling fire. As time went on they knew that cooking a hog would taste much better raised from the embers. They then came up with a way to lift the hog off the flame and cook it slowly, by using wood or bone skewers layered over a sunken pit 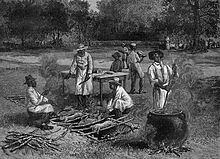 The early settlers in the USA quickly took to raising hogs, and most farmers owned at least half a dozen each. By the 1600s thousands of hogs populated the colony in Pennsylvania, and grain fields were being decimated by the influx of them. Around the same time, New York became so overrun with hogs that the city’s streets were so crowded with roaming hogs, that young boys were recruited to herd them into line and drive them out the city into the woods.

When food supplies ran low, several hogs were taken from the woods and fattened up on nuts and acorns that proliferated the area. The hogs were then taken to market every fall, by the local small farmers and plantation owners.  These hogs were then slaughtered and slaves started curing the meat into ham and bacon, they would then spit roast some whole hogs that were left over in hot coals, as a treat.  With the introduction of bronze and iron there was a rush to find ways to use these precious metals, so the concept of metal skewering came to light, and hog roasting was brought up to the next level. Almost overnight cooking hogs became all the rage, and many kitchens had an adaptation of the some sort of spit roast. Large heavy skewers were made in abundance, allowing the entire hog to be skewered through on a heavy iron bar and slowly roasted over an open fire. In the big aristocratic kitchens, there would have been a worker whose main job was to slowly crank the hog while the chef would baste and add spices.

By the late 1700C as kitchens progressed, the idea of roasting an entire hog, in doors lost popularity. There just wasn’t room for an open grate. As an alternative, butchers would offer cut up sections of the hog for customers to cook more conveniently, and hog roast was resigned to being offered at special outdoor events, cooked over a simple specially built fire pit.

To this current day, hog roasts continue to increase in popularity. They are roasted on a spit in a specially designed stainless steel machine, powered by a small engine, and propane gas. These machines are increasingly taking prime position at many celebrations around the world, including wedding, family gatherings, sports and corporate events. People see the hog roast as a focal point at their event, especially when it is raised up, giving a very  spectacular and impressive sight. The hog is cooked very slowly, over many hours, which produces amazing, ‘drop off the bone’ flavorsome, scrumptious pork. This can then be served in a crusty seeded roll, with stuffing and apple sauce, or plated with delicious seasonal salads, coleslaw and variety of sauces.  The aromatic aroma, and the sound of the crackling ‘popping’ add to the whole ambiance and atmosphere at any event.