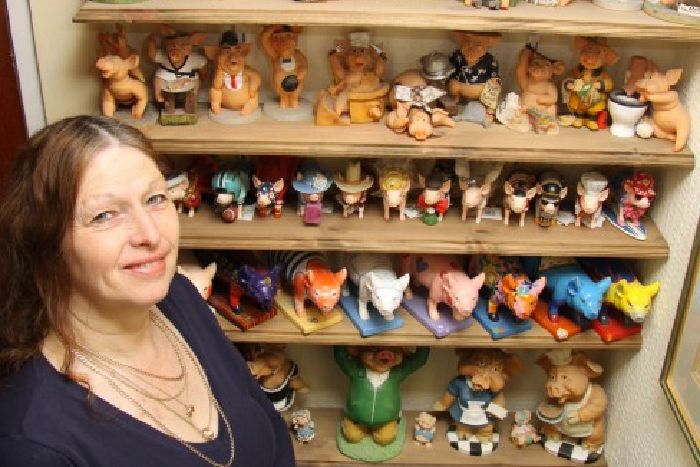 Anne Langton (UK) has over 16,779 pig items which she has been collecting for over 40 years. Ms Langton’s collection started when her then boyfriend, now husband, John bought her a pig-themed pot when they were 17 years old. Her collection includes pig figurines, stuffed toys and piggy banks. Several hundred trips to the car boot later, Anne’s collection is still growing. Her ‘pig world’ ranging from one inch to several feet tall one and setting her back between 5p and £90 an item. Her collection is so large, that if she bought one pig a day, it would take her 44 years to acquire them all. https://www.guinnessworldrecords.com/world-records/largest-collection-of-pigs/

The record bid on October 12th to produce the largest portion of pulled pork was introduced by Sonny’s BBQ and other members of the BBQ industry. The incredible meat feast saw a total of 2,012lbs of shredded pork successfully prepared to set the record.
This record was shattered on 28th April 2018 when businesses in Ocean Springs, Mississippi cooked the largest serving of pulled pork 1,084.2 kg (2,390 lbs 8 oz). This event was held to encourage community spirit and raise awareness for local charities.

Different nations have their own favourite ways of serving up some tasty pork, and on 16th December 2012 in Taipei, Taiwan, braised pork and rice was very much on the menu when they produced an appetising-busting serving of 647kg of the meal. If you’re wondering about the ingredients involved in this slow-cooked speciality, the Guinness World Records website breaks down the shopping list as 252kg of rice, 297.5kg of pork belly; 35 l. of soy sauce, 9kg of sugar, 14 l. of five spice sauce, 6 kg of fried shallots, and even a cheeky 4 l. of rice wine.

Battle of the Suckling Pig

Lechón is a popular pork dish in several regions of the world, but most specifically Spain. The word lechón refers to a suckling pig that is roasted over charcoal then shredded for the annual challenge or special occasions, festivals, and the holidays. An annual challenge takes place to produce the largest portion of lechón throughout the Philippines, this battle was launched in 2003 and is hotly contested every year. In 2015, Quezon City set the Guinness World Record for the largest serving of ‘lechon’ roasted pig – 4,045 kilograms. They snatched the title from Mexico, which previously set a record of 3,094 kg. On March 6, 2016 another Mexican firm won back the record after serving 6,626 kg of roasted pig. Students volunteered and fired up 47 ovens, had heaps of tortillas, pickled onions, and fiery habanero sauce. Their humongous haul of roast pork is equivalent to just over 132 whole hog roasts.
In 2018 the challenge was again contested in the Philippines and another world record attempt was made, the city expected at least 900 pigs to be roasted on Sept. 8, which would translate to about 36,000 kg.